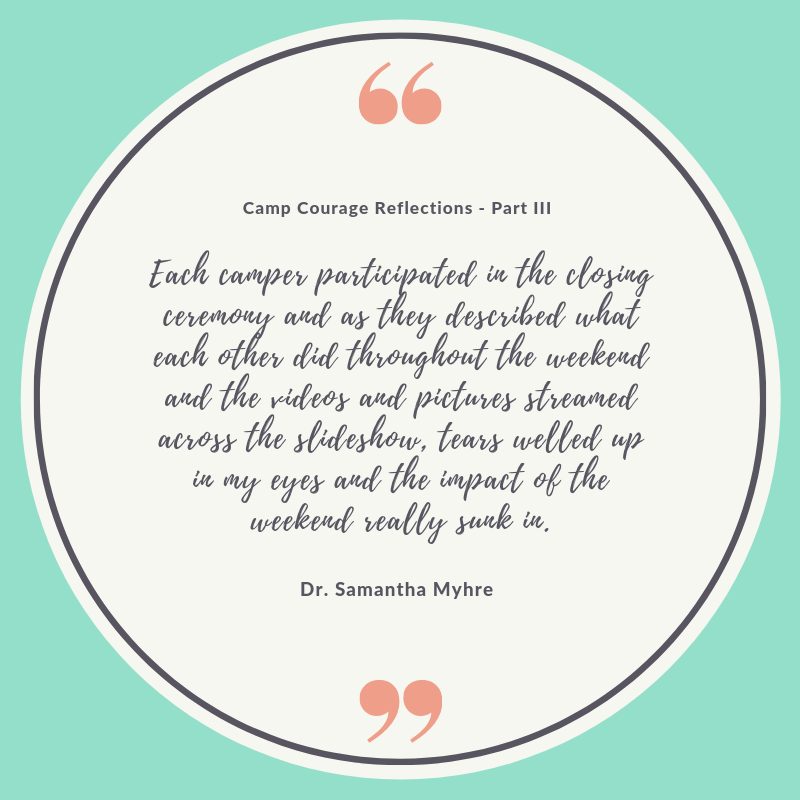 Many of us remember arriving to summer camp when we were young. Just thinking about it can bring back that butterfly-in-the-tummy feeling. Our thoughts might have been something like “What are we going to do each day?”, “What will the food be like?”, “Will I know anyone here?”. Many of our Camp Courage campers likely had those same typical feelings and thoughts as they were being dropped off by their families. We were aware of this, and we were also aware that many of our campers may have also been thinking about the separation from their parents, the cleanliness of the cabins, what the other campers and even counselors were thinking of them, if they would be safe throughout the weekend, or what was in the food. Every camper that arrived that Friday evening was taking a giant leap of faith, and facing fears in different ways. They knew that despite how much their anxiety or OCD was telling them “NO WAY. NOT SAFE. YOU SHOULD NOT DO THIS.”, that they were strong enough. They knew they were worth it.

Bringing together children and teens from various backgrounds and with different types of anxiety and OCD presentations was such a rewarding experience. On the very first night we witnessed vulnerability in action. Children and teens alike were sharing their personal journeys with one another, discussing how their anxiety or OCD manifests, what therapy has been like for them, how they talk to friends and family about their symptoms, and what their thoughts were about the upcoming weekend. You could almost see walls dropping as the conversations unfolded. By the end of the first evening, there was giggling, joke-telling, helping hands while working on projects, and a general feeling of normalization and inclusivity.

The second day of camp was action-packed. We began the day by coming together as a group to acknowledge what worries each camper faces, to discuss how to face fears throughout the day, and to create a plan for how we could motivate and encourage one another throughout the day. The rest of the day was filled with rock climbing, crate stacking, archery, zip-lining, and a giant gym swing. We witnessed several campers go from “I am NOT doing that.” to “Actually… that looked kind of fun… I think I might try it!”. What an honor to be able to be a part of that! Every single camper participated in one or more (several completed all!) adventure activities on Saturday. I think my voice might’ve gone hoarse from all of the cheering!

As we were around the campfire on Saturday evening, one of the things that stood out most to me was how many times I heard something along the lines of “I just know now that I am not alone.” We came into the weekend with our primary goal being to create a space where children and teens with OCD can feel confident enough to face fears. I think the normalization that they are not alone ended up being the biggest take away for many of our campers. And that normalization likely sparked the energy that we saw during Saturday’s activities.

All of a sudden it was Sunday morning and we were realizing that our weekend had come to an end. One of our campers led the rest of the group on a nature hike before we planned for the families to arrive for closing ceremonies. There was a mixture of feelings floating around in the air including sadness that the weekend was over but also pure excitement and pride. So many campers sprinted to their families upon their arrival exclaiming the things they were able to do throughout the weekend. Watching these reunions and seeing the emotion on both the camper’s face as well as the faces of their family members was absolutely heart-warming. Each camper participated in the closing ceremony and as they described what each other did throughout the weekend and the videos and pictures streamed across the slideshow, tears welled up in my eyes and the impact of the weekend really sunk in. You could see families embrace their camper as they heard or saw what the child had done. You could see the huge smiles across the campers’ faces as the ceremony went on. Meaningful does not even begin to describe it.

I want to thank the families, therapists, camp facility, and especially the incredible campers who made the weekend possible. It was an honor and a privilege to experience the weekend with you all. It has been one of the most rewarding experiences of my career and I cannot wait to see returning and new campers this fall!